The Politics of Life and Death: Mexican Narconarratives at the Edge of the Twenty-first Century 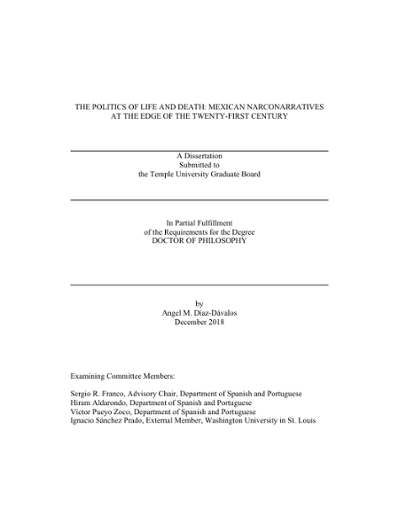 This dissertation examines the link between sovereignty, law, community and (il)legal violence in 20th/21st century Mexican narratives associated with drug trafficking themes. The field of biopolitics provides ample pathways to explore the intersection of these concepts as they are portrayed in contemporary Mexican literature, music and film. Combining the theories of Michel Foucault, Roberto Esposito, Giorgio Agamben and Carl Schmitt, among others, this project analyzes the law and the sovereign, as well as the community and the narco within the spaces they inhabit as they enter in (violent) dialogue with each other. Furthermore, such relationship is viewed panoramically in three stages. First, I analyze the rise of a mythologized narco-sovereign and the creation of what could be conceptualized as Narcobiopolitcs, which materializes the moment the drug trafficker emerges into the Mexican collective imaginary and fights for a space for its own “community.” Second, narco-communities are allowed to thrive in the outskirts, cementing the figure of the narco-sovereign, a figure that challenges the power of the law. Lastly, the relationship between the law and the trafficker disintegrates due to an excess of violence and the communities they inhabit collapse, thus pointing to the fall of the (narco) community. The authors examined to explore these three phases are: Pablo Serrano, Yuri Herrera, Juan Pablo Villalobos, Gerardo Cornejo, Raúl Manríquez, Víctor Hugo Rascón Banda and Orfa Alarcón (literature); Gerardo Naranjo (film); Los Tucanes de Tijuana, Jenni Rivera, El Komander, Gerardo Ortiz and Los Tigres del Norte (music). The prologue provides a socio-historical context explaining the rise of drug trafficking violence in 20th century Mexico, as well as the current debate on narconarratives. It argues that such debate has yielded stagnating responses from academics and critics and specifies this project’s need to steer away from it. Chapter one offers the theoretical framework that will be utilized along the subsequent chapters in order to create a new space for dialogue surrounding these narratives. Chapter two analyses the rise of the mythologized figure of the narco-sovereign. The purpose of this entity is to create its own narco-community at the margins of the law, even though such community will always be under the Sovereign’s gaze. Chapter three showcases well-developed narco-communities who have managed to claim, through their narco-sovereigns, a space in their fight against the government institutions. Chapter four pinpoints the moment the relationship between legal and illegal violence collapses. This moment is portrayed in the narratives as the destruction of the community, with both entities (government and drug traffickers) responsible for such catastrophic downfall. Finally, the epilogue will conclude this dissertation by summarizing the main theoretical and analytical discussions, thus offering an opening to academic dialogue about narconarratives without the aim of sealing off the topic. Additionally, the epilogue will disclose research routes to undertake in the near future.