BLOOD DISORDERS: A TRANSATLANTIC STUDY OF THE VAMPIRE AS AN EXPRESSION OF IDEOLOGICAL, POLITICAL, AND ECONOMIC TENSIONS IN LATE 19TH AND EARLY 20TH CENTURY HISPANIC SHORT FICTION 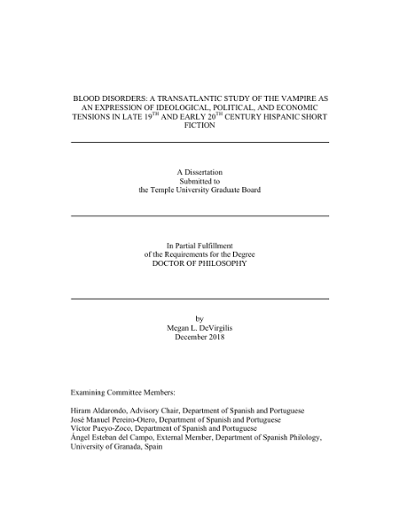 This dissertation explores vampire logic in Hispanic short fiction of the last decade of the 19th century and first three decades of the 20th century, and is thus a comparative study; not simply between Spanish and Latin American literary production, but also between Hispanic and European literary traditions. As such, this study not only draws attention to how Hispanic authors employed traditional Gothic conventions—and by extension, how Hispanic nations produced “modern” literature—but also to how these authors adapted previous models and therefore deviated from and questioned the European Gothic tradition, and accordingly, established trends and traditions of their own. This study does not pretend to be exhaustive. Even though I mention poetry, plays, and novels from the first appearance of the literary vampire in the mid-18th century through the fin de siglo and the first few decades of the 20th century, I focus on short fiction produced within and shortly thereafter the fin de siglo, as this time period saw a resurgence of the vampire figure on a global scale and the first legitimate appearance in Hispanic letters, being as it coincided with a rise in periodicals and short story production and represented developments and anxieties related to the physical and behavioral sciences, technological advances and urban development, waves of immigration and disease, and war. While Chapter 1 establishes a working theory of the vampire from a historical and materialist perspective, each of the following chapters explores a different trend in Hispanic vampire literature: Chapter 2 looks at how vampire narratives represent political and economic anxieties particular to Spain and Latin America; Chapter 3 studies newly married couples and how vampire logic leads to the death of the wife—and thus the death of the “angel of the house” ideal—therefore challenging ideas surrounding marriage, the family, and the home; lastly, Chapter 4 explores courting couples and how disruptions in the makeup of the public/private divide influenced images of female monstrosity—complex, parodic ones in the Hispanic case. One of the main conclusions this study reaches is that Hispanic authors were indeed producing Gothic images, but that these images deviated from the European Gothic vampire literary tradition and prevailing literary tendencies of the time through aesthetic and narrative experimentation and as a result of particular anxieties related to their histories, developments, and current realities. While Latin America and Spain produced few explicit, Dracula-like vampires, the vampire figures, metaphors, and allegories discussed in the chapters speak to Spain and Latin America’s political, economic, and ideological uncertainties, and as a result, their “place” within the modern global landscape. This dissertation ultimately suggests that Hispanic Gothic representations are unique because they were being produced within peripheral spaces, places considered “non-modern” because of their distinct histories of exploitation and development and their distinct cultural, religious, and racial compositions, therefore shifting perceptions of Otherness and turning the Gothic on its head. The vampire in the Hispanic context, I suggest, is a fusion of different literary currents, such as Romanticism, aesthetic movements, such as Decadence, and modes, such as the Gothic and the Fantastic, and is therefore different in many ways from its predecessors. These texts abound with complex representations that challenge the status quo, question dominant narratives, parody literary formulas, and break with tradition.